The explosion in rooftop solar photovoltaics (PV) in Australia is plain to see across many suburbs. Solar PV systems are now installed on over one million roofs up from a little over 900 homes in 2006. However the installation of this distributed power network has placed increased demands on the electrical grid including power supply and quality issues. As more and more households look to adopt solar PV to combat growing electricity prices, Griffith University research into energy storage and supply holds the promise of cheaper, better quality power for the low voltage (LV) electricity distribution network.

According to the research from Griffith’s School of Engineering, a forecast-based, three-phase battery energy storage scheduling and operation system provides benefits such as reduced peak demand, more efficient load balancing and better management of supply from solar photovoltaics (PV).

“The low voltage network is a typical suburb of a few hundred homes where there is a single area transformer. Recently there has been a substantial increase in the number of homes with installed residential solar PV in these settings,” says Mr Bennett.

“Daily peak demand in residential networks typically occurs in the evenings in summer and both late morning and evening in winter. But because solar PV generation is dependent on incoming solar radiation, peak generation occurs during the middle of the day, typically when demand in the residential distribution network is low.

“This means there is an incongruity between when energy is generated and when it is required, which can lead to power supply and quality issues. 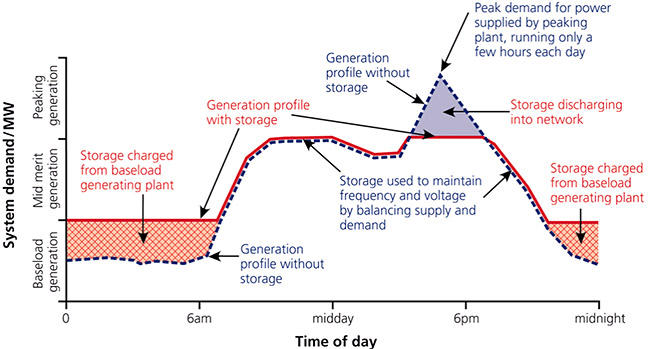 Foundation for a future smart grid

Associate Professor Stewart says the recent significant uptake of solar PV has in some locations created issues in the LV network, including surplus power being pushed up the grid, unbalanced phases and poor power quality.

“Our solution tackles these immediate issues while also setting the foundation for a future smart grid,” he says.

“The two main advantages of intelligent BES in the LV network are that we can mitigate power quality issues attributed to fluctuations in generation from renewable energy sources such as PV, and we can store surplus energy gathered during the middle of the day and distribute it when it is needed in the evening peak period.

“If such a system was implemented across an entire city it would reduce wholesale peak generation charges, alleviate costly upgrades to the grid, reduce the average time of outages and improve power quality for customers.”

Associate Professor Stewart and Mr Bennett agree that distributed energy resources and smart power control electronics can revolutionise the grid and reduce the price of electricity for customers.

Mr Bennett’s research was facilitated as part of a Queensland Government 2013-2015 Partnership Grant.

This has allowed collaboration between Griffith University and energy companies Elevare, Ergon Energy and Energex on projects to develop and apply world-leading smart-grid theory, technology and applications such as STATCOMs, energy storage systems and integrated solar PV. From bleeding to self-healing concrete